Imagine paddling 50,000km in a kayak from Germany to Australia!

Western Australian sea kayaker Sandy Robson is undertaking this epic voyage to re-trace the journey made by Oskar Speck in the 1930s. Starting from the Danube River in 1932, seven years, several kayaks and many thousands of kilometres later, Oskar landed in Australian waters.

For Sandy, funding such a mammoth venture is a challenge in itself and she approached Aussie Crates to see how we could help. To support Stage 3 of Sandy’s expedition, Aussie Crates have provided a customised timber shipping case to protect the kayak on its sea voyage from Perth, Western Australia to Chennai in India. Sandy will be re-united with her kayak in March 2014 when this phase of her adventure will involve paddling around Sri Lanka and up the east coast of India, covering a distance of 3100kms over 4 months.

We wish Sandy calm waters and wonderful memories on her journey.

Protect your valuable equipment with a customised timber packaging solution from Aussie Crates. We have packaged planes, trains, automobiles and now kayaks. You name it, we can pack it.

Find out what you need to ensure your items are packaged correctly, safely & protected!

Don’t wait until it’s too late, get the guide now! 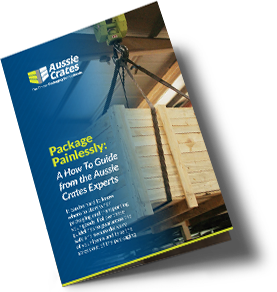